My mother, Beatrice Case, died one week ago, on March 16, 2014. She was 95 and had been remarkably healthy until just two months ago. She was a much-loved woman, especially by my 97-year-old father with whom she shared 72 years of marriage. My dad says his “secret” for a long and happy marriage is to never go to bed mad and always say “I love you.” 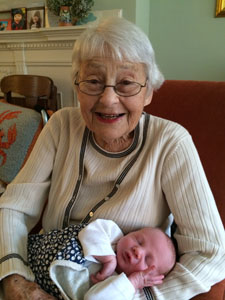 I don’t usually like to talk about my family in connection with my work at InterfaithFamily. But there is something important that I want to share to honor her memory.

My mother’s father was a traditionally observant Jew. My parents were founding members of the Conservative synagogue to which my mother schlepped my older brother and then me to religious school three times a week, a 25-minute drive each way. They made their opposition to intermarriage unmistakable to my brother and me.

In my eulogy I said that in the spring of 1968, when I was a senior in high school, I had started going out with Wendy, who wasn’t Jewish at the time (or for many years later).  One day I asked my mom, “what would be so bad if I kept on going out with Wendy?” She said: “Well, you might really like her a lot, and you might go to college and not meet any one you like as much, and then you might get back together with her, and then you might want to get married.” That’s exactly what happened.

I also said in my eulogy that six years later, when I told my parents that I wanted to marry Wendy, they had a choice to make, and they put their love for me and their devotion to their family above anything else. Wendy feels that they came to embrace her as their own daughter.

At shiva the next day a cousin, who visited with my father while the funeral was taking place (he isn’t able to travel), told me that at about the same time as I was giving my eulogy, my father started telling her about exactly the same thing. He said, “Bea and I talked about it. We decided that we didn’t want to turn our backs and lose our son. And look at the wonderful family that we got.”

Also at shiva my mother’s childhood next-door neighbor and friend Elaine was talking to Wendy and said that my mother lived a “charmed” life. Wendy said, “probably the worst thing that happened to her is that Ed married me” and Elaine said, “that’s right.” Wendy said, “if I’m the worse thing that happened to her, I guess she did have a pretty charmed life,” and Elaine readily agreed. Because Wendy and I have been married for almost 40 years. Our daughter and son are happily married to wonderful partners; my mother adored all of them, and the feeling was mutual. My mother got to meet and know three great-grandchildren; the oldest one, who is three, is asking, “where is great-grandma?”

I would like to think that my mother and my father could see into the future the whole little universe of our loving family that would result from their loving embrace. But that embrace made something more than a loving family possible – they opened doors to continuing Jewish life. Wendy and I have been very Jewishly engaged. We can’t know for certain what our children’s families’ long-term relationship to Judaism will be – but our daughter’s wedding was officiated by a rabbi – my parents got to attend – and so was our son’s; each of our grandsons had a bris – my mother got to attend the second one, just last November; and our 8-month old granddaughter currently is a regular attendee with her parents at services at Mishkan in Chicago.

I said in my eulogy that my mother leaves behind the ongoing radiating ripple effect on the world that she and her thousands of interactions have had. She set a great deal of warmth and brightness and loving-kindness in motion. And she set the possibility of an ongoing Jewish future in motion too. I know that for me and my family her memory will always be a blessing.

« More Debate » Our Thoughts on Israel