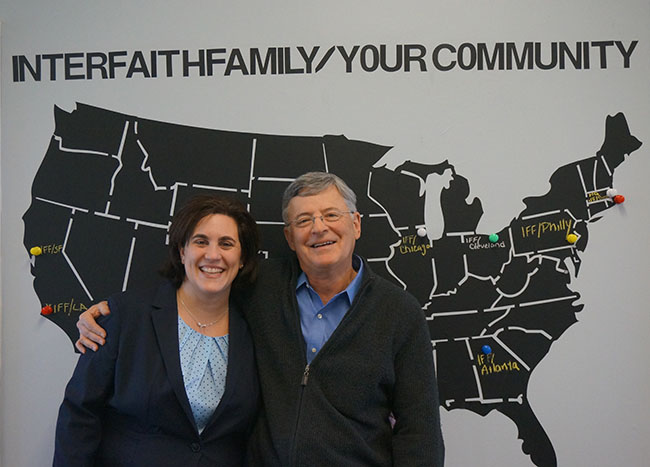 March 31, 2015 is a big day in my life and the life of InterfaithFamily, the organization I founded in 2001 and have led for the last fourteen years: Jodi Bromberg, IFF’s President for the last year and a half, will become CEO, and I will transition to a new Founder role.

I hasten to add that I am not retiring and will continue to work for IFF. I will be focusing primarily on certain fundraising relationships and IFF’s advocacy work, subject to Jodi’s direction. My passion for engaging interfaith families in Jewish life and community is unabated, and there is much work to do.

But I won’t be the person in charge.

This transition is a milestone in a carefully thought out plan developed over the past three years with InterfaithFamily’s Board of Directors.  In 2012, spurred largely by the rapid growth of our InterfaithFamily/Your Community model (see more below), I told our Board that while I wanted to continue to work with IFF, it was time for new leadership and to find a successor to be in charge of the organization. After an extensive search, we found Jodi to be the perfect combination of passion for the issue, and great leadership and interpersonal skills. Our expectation was that Jodi would learn about and take on responsibility for our operations and fundraising activities over a period of up to two years, and if successful in that interim period would be elected CEO by the Board. Jodi has done so well that last October, after only a year as IFF’s President, Jodi and I proposed that she become CEO on March 31, and the Board enthusiastically agreed.

We are well aware that the accepted business school and consultant wisdom is that founders of non profit organizations should “get out” when successor CEOs take over. It’s called the “graceful exit” strategy. We are following a minority view, what’s called the “mutual success” strategy, based on successful cases of founders staying on and working productively under the direction of their successors.

Many people say that I should be very proud of what InterfaithFamily has accomplished in the last fourteen years. When we started in 2002 it was me and a half-time editor, Ronnie Friedland, with a budget of about $200,000. Fast forward to 2015, and we have 24 on staff and three open positions, with a 2015 budget of $3.2 million.

IFF started as a web-based resource. We expanded organically in response to “customer” demand, from personal narratives of people in interfaith relationships, to how-to-do-Jewish resources, listings of welcoming Jewish organizations and professionals, our Jewish clergy officiation referral service, and advocacy writing. By 2008, we had 282,000 unique visitors to the site.

I always felt that local services and programs for interfaith families were badly needed, and always thought about InterfaithFamily filling that void. In 2008 and 2009, our then Board chair Mamie Kanfer Stewart and I spent a lot of time working with a group of Jewish family foundations who were developing a plan to “change the paradigm” on intermarriage to the positive. That funder group said that three things were needed: a “world class” website, training of Jewish leaders to be welcoming, and a range of local services and programs. Because of Madoff and a downturn in the economy, their plan was never funded. But it laid out a road map that I was determined to follow.

I kept talking with funders about our interest in providing services and programs “on the ground” in local communities. In 2010 we added training capability and resources with the addition of Karen Kushner, who still consults for us, in San Francisco. One day Jay Kaiman, executive director of the Marcus Foundation, perhaps tiring of my pitch, said “Do a pilot somewhere. Do a pilot!” Somewhat later a foundation program officer, who I can’t name because of the foundation’s privacy policy but to whom I am eternally grateful, said she had some funding available at her discretion and would support a pilot project. I went back to Jay, who said he would provide the last money needed. I then designed what became the InterfaithFamily/Your Community model; the Crown Family Philanthropies and the Jack and Goldie Wolfe Miller Fund signed on; and we launched InterfaithFamily/Chicago in July 2011 with Rabbi Ari Moffic as director.

The original plan was to run IFF/Chicago as a pilot for two years, refine it, and then seek to expand to other communities. But when Jeff Zlot, a lay leader in San Francisco, heard about the pilot, he said, “I want that in the Bay Area.” Coincidentally, the leaders of InterFaithways, a Philadelphia non profit founded by one of my heroes, Leonard Wasserman, expressed interest in merging with IFF. As a result, by mid 2012, I was waking up in the middle of every night with my mind racing with details of the Chicago, San Francisco and Philadelphia projects. That was the point I decided that we needed someone other than me, someone much better suited to manage a rapidly growing organization, to be our CEO.

Since Jodi joined IFF in October 2013 we have continued to expand, opening IFF/Boston in 2013, an affiliate relationship with Cleveland in 2014, IFF/Los Angeles in 2014, and securing funding to open IFF/Atlanta by mid-2015; another major city federation told us just this week that they expect to fund our next IFF/Your Community starting this year. We have a strategic plan to be in nine communities by the end of 2016. My personal hope for the organization is to be in twenty communities over the next five years.

I believe that the InterfaithFamily/Your Community model is the single best available opportunity the liberal Jewish community has to engage significant numbers of interfaith families in Jewish life and community. No one else is offering or proposing to offer anything that compares to our synergistic, national and local, top-down bottom-up approach of national web-based and training resources, and a comprehensive range of services and programs on the ground in local communities.

We are executing well on our very ambitious offerings – traffic to our website grew by 30% in 2014 to over 864,000 unique visitors, and if we grow at half that rate we will reach 1 million visitors in 2015. We have developed a resources and training capability that can now help organizations all over the country be more welcoming, and we are demonstrating impact in our local communities, with thousands of interfaith couples becoming aware of what is available to them in their local Jewish community, building trusted relationships with our staff, and engaging in Jewish learning experiences that build community with other Jewishly-engaged interfaith families. Because of what we do, thousands of young Jews with one Jewish parent are engaging in camps, youth groups, Israel trips and other Jewish learning experiences.

I am highly confident that Jodi Bromberg will lead IFF on this path of continued growth. She has a wonderful way of working with people and working through process that is not my strong suit (to put it mildly). She understands the need to put mechanisms and procedures in place so that the high level of activity and expansion can be controlled and managed well (I would tend to want to do everything myself). She has her own compelling personal story underlying her passion for our cause. IFF’s future will be very bright with Jodi in charge. I look forward to continuing to contribute as best I can.

I have a very long list of people to thank for their part in making InterfaithFamily’s success and growth possible. I’m looking forward to doing that on October 22, when IFF is having an Afternoon of Learning and a reception at which I will be honored, along with another of my heroes, CJP President Barry Shrage. But I would be remiss not to mention Heather Martin, IFF’s Chief Operating Officer, who has put up with me since 2004. Whatever I went out and promised to funders and partners, Heather always made it happen. It would not be an overstatement to say that none of IFF’s growth would have been possible without her involvement. Fortunately, Heather and Jodi have developed a great relationship, making me even more optimistic about IFF’s future.

« Shifts in the Conservative Movement » You’re One of Us