Last week the United Jewish Communities (UJC) held its annual convention, called the General Assembly (GA). Something different and potentially very significant happened: there was talk about intermarriage, in a positive way.

Since I got involved in the professional Jewish world nine years ago, I think I’ve been to every GA except for two that were held in Israel, including last week’s. There are probably more Jewish leaders gathered at the annual GA than at any other time or place.

For many years I have lobbied the UJC, usually  unsuccessfully, to devote  convention sessions to the subject of outreach to the intermarried. (Like most conventions, there are big “plenary” sessions where most participants attend, and then there are multiple competing sessions over many time slots that attract smaller groups.)

I’ve actually spoken on panels at at least two GA’s, but the sessions were always about inclusivity generally, not outreach to interfaith families in particular. At last year’s GA in Nashville, there was nothing about intermarriage on the program. A GA visitor who didn’t know better, based on the absence of discussion at GA’s, wouldn’t be aware that outreach to interfaith families was the biggest challenge and opportunity the Jewish community faces.

I’m sorry I couldn’t go to Jerusalem this year, because finally things changed. I urge you to watch a video blog posted by Jacob Berkman of the Jewish Telegraphic Agency, which is embedded below. Berkman reports that Edgar Bronfman and Adam Bronfman broke new ground by bringing the subject of welcoming interfaith families to the front stage of the Jewish world.

I blogged last month about an important new book by Edgar Bronfman, Hope, Not Fear, and we recently published an excerpt from the book that has attracted some interesting comments. But the Bronfmans’ speeches at the GA have taken the discussion to an entirely new level.

Edgar Bronfman spoke first, at a pre-GA gathering focused on the “Next Generation.” In his speech he said the Jewish community needs to stop regarding intermarriage as the “enemy.”. UJC leaders, including Kathy Manning, chair of the UJC executive committee, are quoted as responding sympathetically to viewing intermarriage as an opportunity. 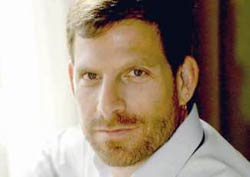 Most remarkably, Adam Bronfman, Edgar’s son and managing director of the Samuel Bronfman Foundation (one of InterfaithFamily.com’s most generous supporters), spoke at a plenary session about the future of the Jewish people. Based on his own experience he urged the thousands of Jewish leaders in attendance to consider the potential for positive Jewish involvement by interfaith families if Jews and Jewish institutions welcome them.

Berkman’s video blog includes excerpts from the speech as well as a revealing interview in which Adam further explains his views: if an interfaith couple chooses to lead a Jewish life, institutions should be completely open to them; interfaith couples “on the ground” are living Jewishly and not focusing on status issues; more and more Jewish institutions are recognizing that the future for them lies in the Jewish world as it is composed, with 50% of young adults who identify as Jews having grown up with one Jewish parent. He concludes by saying that Judaism was never meant to exist in a “gated community” but was always meant to be open, that its central ideas will remain but be surrounded by evolving new ideas; and that if something is of value, people will be attracted to it and will not leave.

It is extremely gratifying to me to know that a positive response to intermarriage has finally made it to the front stage of Jewish leadership. I can only hope that those in attendance take the message to heart and that positive attitudes and concrete actions follow.